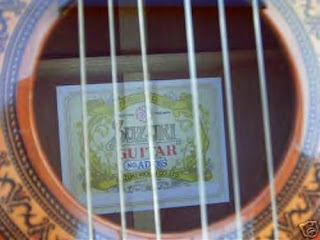 Their guitars have printed on the label 'est. 1887' but that date has to do with the the original Masakichi-led company and it's production of violins. The production of guitars by the original SuzukI factory seems to have started,in the early 1900's.

One reference says...
"Masakichi Suzuki was Japan's first violin producer. His father was a samurai moonlighter and made shamisens in Nagoya. Masakichi succeeded his father's craft business that soon failed. In the push for westernization in Meiji, he naturally became interested in shamisen's western counterpart: the violin. In the 1880s, he started to manually produce and sell violins. He founded the Suzuki Violin Factory in 1900. By 1910, his factory was producing 65,800 violins per year. Nagoya became the manufacturing center of string musical instruments...

Both companies made guitars that commonly have a laminated back or sides, many times the top also is laminated, but the sound, playability, and volume are what makes them so popular. Both Suzukis used a very high grade of laminate and the construction usually shows a high degree of craftmanship. To some players, the neck shape of their guitars is one reason they seem so playable.
Nagoya Suzuki made violins and mandolins, and is still in business making violins, but no guitars. They stopped making them around 1989.

Nagoya Suzuki had a 'Three S' brand of guitar that seems to be consistently very highly valued by everyone that owns one. They also produced an Insignia series of guitars in the 80's that had solid woods used in the manufacture and had more of an electric guitar-type of neck - thinner than a typical acoustic guitar.

There are thousands of players worldwide who would like to know more about their Suzuki guitar. It's a common story that when someone has G.A.S (Guitar Acquisition Syndrome) and needs to let a guitar or two go, the Suzuki is the one that stays behind and can't be replaced. Probably the skill acquired from violin-making and the other instruments played a large role in the good craftsmanship, according to one web source cited previously. It makes sense. Good wood, or good laminate, and good craftsmen, make a good guitar.

If you own a Nagoya Suzuki guitar- congratulations on what you probably already know - that you own a well-crafted and good sounding instrument. One that is still undervalued in the opinion of many players (in other words - a good buy). Maybe you'll hang on to it and see that there is something special about many of their instruments. In any case, as Tetsu said..."Have a nice life with Suzuki guitar."

Also, if you would like to contribute to the establishment of a knowledgebase about Suzuki Guitars: Please:
:send in your pictures;
:please buy a T-shirt;
:please buy an original piece of artwork based on the Suzuki legacy...:).
Here.... really!........we want to keep the whole principle of an unrecognized humble manufacturer of quality guitars alive for future generations of: players and luthiers!!!!!
Posted by tomas 146 comments:

Re: the serial number: on many of the models the first one or two numbers in the serial number stands for the year in which it was manufactured; from the 60’s to the 80’s. I have never seen a definite 1950's guitar yet, mainly because I don't know enough about them yet.
The other prefixes/suffixes ...W, C, S, VS, D, G, A, T, R, O, J...may follow other common meanings.
W = Western model
F = Folk Model
FM = Flame Maple
C = Cutaway
E =Electronics
K =?
S =Spruce (top)
VS = Violin Sunburst color
D =Dreadnaught shape
G =Grand Concert shape for classicals; some 'G' acoustics however had a large Gibson-type headstock
A =?
T =? Takeharu sometimes
R =?Rosewood
O =?Ovangkol
J =Jumbo shape
(if you can help with understanding their system, please DO write me at suzukiguitars@gmail.com!....Thanks!)

Find your guitar here and comment please, on what you think of the guitar; the sound; type of woods used; date of mfr; and anything else you would like to say.
Submit pictures by emailing suzukiguitars@gmail.com
Thanks!

"I have a Suzuki, but it doesn't sound as good as I had hoped for..."
If you have a Suzuki that doesn't sound so great...
Not every Suzuki guitar is equal to an "inheritance" guitar.
But, some are.
Some may just require a setup to sound better; others may be too heavily built or have intonation problems (personal experience with some steel strings built by Kiso). BUT, it's possible to fix some of these problems and have your guitar sound a lot better.
Also, different years, different labels (jobbers?), and whether the guitar was intended for export or for Japan - seems to have made a difference.